The opening of the Atlanta Falcons new home, Mercedes-Benz Stadium, has been moved back yet again.

This is not the first delay! The opening was recently pushed back because of issues with the stadium’s rooftop, a similar problem is now causing an even longer delay. Initially the stadium’s grand opening was planned for March 1st, however that was moved back to June 1st and now has been pushed all the way to July 30th.

Atlanta United, Major League Soccer’s newest team, is set to play in Mercedes-Benz Stadium on July 30th. In the meantime, the United has been playing its home matches at Bobby Dodd Stadium, the home of the Georgia Tech Yellow Jackets in Atlanta.

On the off chance that the stadium’s rooftop issues are not tackled by July 30th, an alternate course of action will have to be set up for the United and conceivably for the Falcons. NFL preseason games are set to start in early August.

Problems are not totally unexpected as the rooftop at Mercedes-Benz Stadium is the first of its kind. It is an engineering feat where the roof is made out of eight separate petals which have a planned opening time of eight minutes.

The delays have now jeopardized not only the Falcons’ and United home games, but also two early-season college football games. Alabama and Florida State are slated to play Sept. 2 while Georgia Tech plays host to Tennessee on Sept. 4.

Time will only tell how the delays will affect the start of the season. Regardless, the Georgia Dome still stands as a viable secondary option should delays continue. 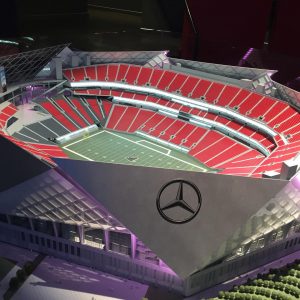